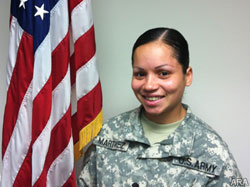 When the nation celebrates a cultural legacy, as we do when we observe National Hispanic Heritage Month, we are often reminded of our different backgrounds. But in the U.S. Army Reserve, this month also helps us to realize that as a diverse force, we all strive toward a common goal.

“What convinced me to join the U.S. Army Reserve was the honor, respect and loyalty that I feel toward my country,” she says. “Although I was born in Puerto Rico and we are not a state, I am an American citizen and the USA is my country. I have to do my part to defend it.”

Martinez-Crespo joined the Army Reserve after scoring well on the Armed Services Vocational Aptitude Battery in high school – and she hasn’t looked back.

“The U.S. Army Reserve offered me wonderful opportunities for education and a professional career,” she says. “As a college student, the Reserve helped me pursue a civilian career in biology by paying for my courses. The Reserve also trained me as a human resources specialist, which has helped me in my civilian job as a legal clerk in a law office.”

As the U.S. Army Reserve observes National Hispanic Heritage Month, we celebrate the accomplishments of Soldiers like Martinez-Crespo, as well as the contributions of countless other Hispanic troops throughout U.S. history:

* During the Revolutionary War, Hispanic Americans – along with Hispanic troops from Spain, Mexico and the Caribbean region – helped vanquish British forces along the Gulf of Mexico.

* Hispanic soldiers from along the Gulf Coast came to the aid of the nation during the War of 1812, helping Gen. Andrew Jackson fend off the British once again, this time during the pivotal Battle of New Orleans.

* As the nation continued to expand, thousands of Hispanics took up arms alongside their fellow Texans during the War for Texas Independence and the Mexican War.

* Cpl. Joseph H. DeCastro served the Union with valor at the Battle of Gettysburg, capturing the flag of the 19th Virginia Regiment. For this act of bravery, he became the first Hispanic American to earn the Medal of Honor.

* Several thousand Hispanic soldiers fought as members of the Rough Riders and other units during the Spanish-American War.

* An equally significant share of Hispanic soldiers have fought with distinction in Korea, Vietnam, the Gulf, Iraq and Afghanistan.

Building on this distinguished heritage, today’s Hispanic soldiers continue to serve with distinction, and to strengthen the ranks of the Army Reserve with a rich mix of backgrounds, skills and ideals – key ingredients in maintaining today’s ready, adaptable Army Reserve.

And their numbers have been growing dramatically over the last quarter-century.

Over a period of 20 years from 1983 to 2003, Hispanic members of Army Reserve more than doubled, rising from 10,263 to 22,265. Most have been Hispanic male reservists, but the number of female Hispanic reservists like Martinez-Crespo more than quadrupled – rising from 1,281 to 5,192.

To seize that opportunity, the Reserve constantly reinforces and renews our relationships with Hispanic communities and organizations across the country. Through our partnerships with civic and youth groups, we work to encourage Hispanic students to tap into the educational and career opportunities offered by the Army Reserve.

The Army Reserve also has well-established ties with other Hispanic organizations, including Great Minds in STEM (Science, Technology, Engineering and Math), the Hispanic Heritage Foundation, and the Hispanic Association of Colleges and Universities.

Hispanic troops also play an especially critical role in ensuring our diversity – and in fulfilling the Army’s broader objective to cultivate in all of its soldiers a deeper understanding of diversity, an everyday requirement in today’s multicultural world.

That’s because the U.S. Hispanic community is – in itself – such a diverse reservoir of cultures and talents. It includes members whose heritage as Americans predates the establishment of the United States, as well as recent arrivals from every Spanish-speaking country around the globe.

We recognize Hispanic heritage as a key part of the heritage of the Army Reserve. And through our ongoing involvement with the Hispanic community, we will continue to help it remain a mutual legacy shared by all Americans.

We’ll do that with the help of soldiers like Martinez-Crespo, who serves with both boots planted firmly on the ground.

“When I am in my uniform I don’t see myself as a Hispanic soldier,” she says. “I see myself as a soldier who will defend my country. As we say in the Army: ‘One team, one fight.'”

Caring for caregivers: Resources for navigating an important job

4 unforeseen ways Brexit could affect you

Five must-haves for your new truck