Team USA showed its cohesion in rout of Dominican Republic, but at what price? 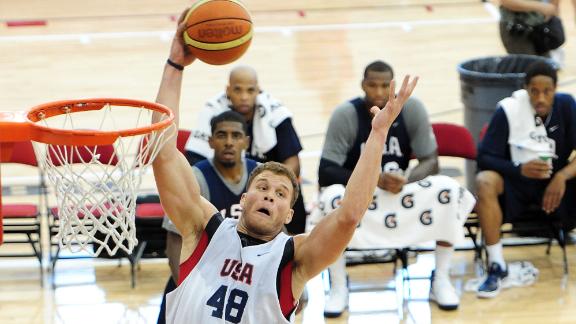 LAS VEGAS — The show goes on, even without Blake Griffin, just as it went on without the other five All-Stars who have been subtracted from the U.S. Olympic men’s basketball team because of injuries. The USA-NBA alliance show should go on, even if more players get hurt, even if it won’t always be in easy in London as it was here against the Dominican Republic Thursday night. If you want great teams, they need the chance to develop into exactly that: a team. That means they’ll have to take chances on injuries & repeatedly.

The risk-reward debate of using NBA players in international competition couldn’t get an easier synopsis than Griffin, who injured his left knee during Team USA practice Wednesday, the same day he signed a contract that obligates the Los Angeles Clippers to pay him up to $ 95 million. Their investment took an immediate dip, like Facebook stock. They’re about to get a player who’s had as many knee surgeries as seasons played in the NBA: two. The first one came as a result of an injury in an exhibition game in what would have been his rookie season. And the second one came when he wasn’t even on the company clock, in a practice for his summer job. 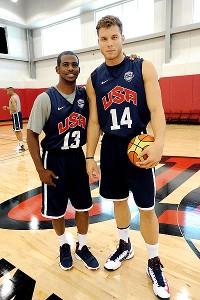 Andrew D. Bernstein/Getty ImagesChris Paul will be the lone Clipper on Team USA now that Blake Griffin is out with a knee injury.

He finished practice and went to dinner as if nothing were wrong but felt swelling and discomfort in the knee Thursday morning and went back to L.A. for tests that brought the official word: a torn meniscus. Anthony Davis, the New Orleans-bound No. 1 draft pick, will take his place on the Team USA roster.

The calls to diminish the NBA players’ involvement with Team USA will only increase with Griffin’s injury. (Not to mention the sprained thumb Chris Paul is dealing with. Notice the connection? Maybe this is a Clipper thing more than a USA Basketball issue.) The main idea being floated is to follow the soccer model of using players under 23 years old for the Olympic team and employ the veterans for the world championships, much like soccer emphasizes the World Cup over the Olympics. It hasn’t been formally proposed, a member of the USA Basketball board of directors said Thursday. But it’s out there. It even has unlikely allies: NBA commissioner David Stern and Dallas Mavericks owner Mark Cuban, the most vocal critic of USA Basketball’s utilization of NBA players.

“Usually when Mark says something, I try to go the other way ,” Stern said during the NBA Finals, “but actually when he is right about something, he may actually be right. And here I think he actually has a point.”

The counterpoint came during the United States’ 113-59 takedown of the John Calipari-coached Dominican squad at Thomas & Mack Center. It wasn’t the play on the court that was so revealing even Dominican center Al Horford said his team didn’t provide a true test. It was the action along the sideline that showed the benefits of using veterans for multiple cycles of international play, just as USA Basketball Chairman Jerry Colangelo envisioned it. They’ve bonded from their time in Beijing in 2008 (for Kobe Bryant, LeBron James, Chris Paul, Carmelo Anthony and Deron Williams) and Istanbul in 2010 (Kevin Durant, Russell Westbrook, Andre Iguodala, Tyson Chandler and Kevin Love). They’ve played on several All-Star teams together. That’s led to a new group that’s existed as a unit for only a week acting like a high school team that’s been riding a bus to games together for months.

I can easily get hurt playing pickup basketball in a gym somewhere. Here I’m playing with the best players in the world, have the best treatment in the world. So I feel safer here.”

Guys with championship rings and MVP trophies were content to be glorified cheerleaders. They leapt from their seats on the bench in anticipation when teammates shot 3-pointers. They walked onto the court to high-five everyone who checked out of the game. They were in such unison that they even all stood up to alert the officials that a Dominican player was down on the court, injured. Every timeout brought more high fives than the lineup introductions.

“They really like one another,” Team USA coach Mike Krzyzewski said. “You can see it.”

Remember, one of the reasons that the gap between America and the rest of the basketball world closed was because everyone else sent together teams of grownups who had been playing together since they were teenagers, while the U.S. cobbled together squads, gave them a couple of weeks and tried to make the best of it.

“When we’re going overseas, we’re playing against teams that have been together for a while,” Kobe said. “So you have to have that chemistry and understanding of where you’re going to be offensively, but especially defensively, knowing where guys are.”

This height-challenged U.S. roster is based on defensive pressure. They’re playing up. And if they’re not up, they’re reminded to get up, like the time Chris Paul picked up his man in the backcourt, motioned to his teammates to come up, then forced a steal that led to him throwing an alley-oop to Durant.

Durant will wind up as the MVP of this squad — even if he continues to come off the bench — because of his shooting ability. When the Dominican zone defense had U.S. shooters clanking jump shots, Durant checked in and drained his first five 3-point shots.

And this close group did its best to welcome the youngster Davis into the crew. When Davis was knocked to the ground while making a jump shot, none other than LeBron and Durant — the two best players in the world — rushed over to help him up. 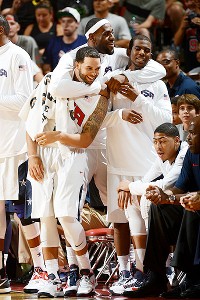 Krzyzewski notices things like that. He noticed the other day after practice that Kobe was over talking to Durant, Westbrook and James Harden, the three representatives of the Oklahoma City Thunder team that knocked him out of the playoffs.

“There are no cliques or anything like that,” Krzyzewski said. “They’re really good guys. And they like one another. I think it translated into how hard we played tonight and how unselfishly we played.”

Chemistry versus injury. That’s the debate.

“I can easily get hurt playing pickup basketball in a gym somewhere,” Bryant said. “Here I’m playing with the best players in the world, have the best treatment in the world. So I feel safer here.”

Bryant and Colangelo said the Griffin and Paul had aggravated injuries they brought with them to the regular season, and none of the U.S. players on previous teams have suffered injuries under USA Basketball’s watch in the past. Colangelo also points to the way players have used their summers with Team USA to propel them into better NBA seasons. Colangelo proudly reports that the 2010-11 MVP (Derrick Rose), Sixth Man of the Year (Lamar Odom) and Most Improved Player (Kevin Love) all came off the 2010 U.S. World Championship team.

“Somebody has to put some value on what USA Basketball has done for the NBA,” Colangelo said. “I think the players are better people for participating, they end up being better players for the experience, they’ve brought more value to their franchises and it’s been great for the NBA.

“I’m strongly in favor of saying when you have a model that worked, don’t break it.”

I agree — as long as the model doesn’t break too many players.

4 easy ways to teach kids about animal care and pet adoption this holiday...

Step up, America: 5 ways public transportation is crucial to our small towns