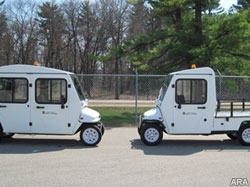 See if you can pass this simple quiz about energy security and sustainability: What do the following have in common?

* The groundbreaking for a new solar power plant in California

* A new study in Wisconsin laying the groundwork for a food-waste-powered electrical power plant.

The answer is that all are projects of the U.S. Army Reserve. Surprised? That’s understandable, because the phrase “sustainability and energy security” probably isn’t the first one that pops into your mind when you hear the words “Army Reserve.”

The Army Reserve is inextricably linked to local communities, because that’s where Reserve centers are located and where soldiers and families live. The goal to be a leader in energy security and sustainability not only supports the Army Reserve’s mission, but also supports the many cities and towns working to conserve resources and protect the local environment. The Army Reserve’s commitment to sustainability is part of an effort to be not only good neighbors but good stewards of the environment and the taxpayer’s dollar.

In addition, the Army Reserve – like the rest of the Armed Forces and all other government organizations – has to cope with budget cuts, now and in the foreseeable future. A great way to do that is to cut fuel bills by increasing fuel efficiency at facilities and developing more sustainable and renewable methods of power generation. Spending less on fuel means more dollars available for training, deployment activities and supporting communities during emergencies.

“That was a lesson I first learned while garrison commander of Fort Bragg, the largest populated military installation in the world,” says Tad Davis, chief executive officer of the United States Army Reserve. “I had the checkbook, and I had to pay the energy bill and the water bill every month. It didn’t take long for me to recognize the importance of conserving resources, and that money saved through implementation of sustainable practices could be used for infrastructure upgrades and newer, more energy efficient facilities.”

Finally, by embracing energy security, the Army Reserve is strengthening national security. Improving efficiency and using alternative and renewable sources of power lessens the nation’s dependence on foreign oil, which is produced in some of the most volatile regions in the world.

As the Army Reserve translates this commitment to energy security into programs and projects, results are already being seen, with the promise of many more benefits to come. The new California solar plant mentioned in the quiz is a 1-megawatt solar array being built at Fort Hunter Liggett. It will become operational later this year, providing one-third of the power for the nation’s largest Army Reserve training installation and ultimately saving $ 1 million in energy costs every year. The Army Reserve is also generating power from geothermal energy at the Devens Reserve Forces Training Area in Massachusetts and using hydrogen fuel cells at the Parks Reserve Forces Training Area in Dublin, Calif.

A number of new facilities the Army Reserve is building have been designed to meet the nation’s green building standards as outlined in the Leadership in Energy and Environmental Design (LEED) certification program for green buildings. Older facilities are also being renovated to make them more energy efficient and hybrid vehicles are being used at larger training centers.

And as part of the Army Reserve’s “Net-Zero” program, some of its largest facilities are being re-engineered so that they produce or recycle the same amount of resources they take from the surrounding community. The Net-Zero program is based on a simple model that uses five approaches to promote sustainability: reduction, repurposing, recycling and composting, energy recovery, and disposal.

The Army Reserve’s sustainability action list goes on and on because resource conservation and energy efficiency have become vital functions. Like leaders in the business community, the Reserve aims to be leaders in helping communities and the nation become better stewards of the environment.

How to put your eye health into 2020 focus this year

New technology will define the future of farming