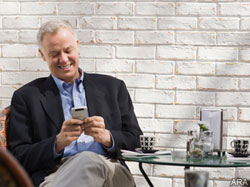 If you use complex passwords for your online accounts, have a firewall on your PC’s Internet connection and only shop at secure websites, you may think you’re doing a good job protecting yourself from identity theft. Those precautions are a good start, but don’t overlook another important opportunity for identity thieves – your mobile devices.

Millions of Americans access the Internet and social media every day with handheld devices, from smart phones to tablets. Yet more than half of us (54 percent) don’t use a password to lock those devices, according to a recent StrategyOne survey commissioned by Experian’s ProtectMyID.

“This survey shows us that while awareness of identity theft risks may be growing, there’s still room for improvement when it comes to what consumers are actually doing to protect themselves from identity theft,” says Ken Chaplin, senior vice president of Experian Consumer Direct, which owns ProtectMyID.

Other risky online habits revealed by the survey included:

“Fortunately, consumers can do a lot to reduce their risk of identity theft,” Chaplin says. “Online resources like the Internet Crime Complaint Center (IC3) and the Identity Theft Resource Center (ITRC) can help educate Americans on preventative steps, how identity thieves operate and what current scams to watch for.”

Defy curiosity. Never open an attachment or click on a link unless it’s something you’ve specifically requested from someone you know. Just because an e-mail is from a friend or co-worker doesn’t make it free of malware. Click the “x” on all pop-up ads to avoid infection, and never download free software unless it’s from a trusted site.

Educate yourself about technology. Become tech savvy: Know what security software you need to keep your computer-and yourself-safe online. Don’t let down your guard by letting your protection lapse. Always keep your antivirus and spyware protection updated.

Fix your passwords. Using the same password for more than one account or a password that’s easy to guess opens the door to identity thieves. Change passwords regularly, never disclose them to others and vary them among different accounts.

Embrace your paranoia. Yes, there are people out there who are out to get you. Don’t forget it.

Negate putting personal information online. You wouldn’t provide your personal identifiers to just anyone on the street who asks for them, so don’t do it online. Become as proactive in protecting your personal, private information online as you are in other areas of your life. Don’t even think of doing anything of a personal nature on a public computer. And remember that posting personal data on social networking sites makes you a target for identity thieves.

Deploy safety precautions. Online fraudsters are constantly changing their tactics, making it hard to stay abreast of every new scheme. Frequently monitor your accounts and financial statements, and check your credit reports at least once a year. Consider using ProtectMyID.com, an identity theft protection program which has services that can provide additional peace of mind.

Damage to your credit is one of the significant harms caused by identity thieves. By stealing your personal information, these criminals can try to open and use new credit accounts in your name. Products like ProtectMyID can help you detect, protect against and resolve instances of identity theft. Multiple layers of defense, like Surveillance Alerts, scan the Internet daily for potentially fraudulent use of members’ personal information. The product also gives members access to a dedicated resolution agent. Log on to www.protectmyid.com to learn more.

Tips for a bigger tax refund

Survey: Many homeowners are not prepared for an emergency

3 expert tips to succeed with any diet routine