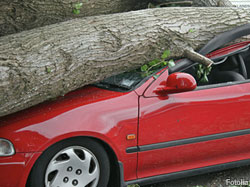 From earthquakes, fire and floods to tornadoes and tropical storms, the natural disasters that hit the nation this year broke records for the billions of dollars in damage they wreaked.

And while catastrophic weather events cost many consumers their homes, cars and businesses, damaged property can be replaced – provided it is insured. But for the insurance providers who must make good on those policies, weather-related catastrophes translated into billions of dollars in losses for which there is no reimbursement.

Insurers are in the business of calculating risk, and with storms and other severe weather taking ever-greater bites out of company profits, experts say it is only logical to expect insurers to seek an increase in revenues to keep pace with skyrocketing catastrophe losses.

Homeowner policies in areas at risk to hurricanes and other disasters have already seen significant rate increases in recent years, according to a study by the University of Pennsylvania’s Wharton School of Business. Now some experts say auto insurers may soon try to recoup some of their losses in the form of higher premiums.

“This year has been particularly expensive for auto insurance companies,” says Cesar Diaz, a veteran agent and http://www.onlineautoinsurance.com/ founder. “Natural disasters have hit residents of many regions extremely hard, and many of those losses are passed on to their coverage providers. A lot of people these days are wondering how much is car insurance going to cost them next year or two years from now?”

Loretta Worters, a spokeswoman for the Insurance Information Institute (III), says losses differ among coverage providers depending on their exposure in storm-struck areas. Those storms have cost insurers dearly.

Disasters in the first six months of 2011 inflicted $ 17.3 billion in insured losses, a 162 percent increase from the same period last year. That caused after-tax net income for auto, home and business insurers during the first half of the year to fall to $ 4.8 billion from more than three times that amount in 2010.

According to a report from ISO and the Property Casualty Insurers Association of America, overall profitability for those companies plummeted from 6.4 percent to 1.7 percent – the lowest for the first half of any year since ISO began quarterly recordkeeping a quarter-century ago.

And those figures do not take into account the havoc wreaked by weather-related catastrophes since then – including flooding in the Midwest, wildfires in Texas and Tropical Storm Irene – caused billions of dollars more in damage.

The National Oceanographic and Atmospheric Administration (NOAA) states that economic damages caused by catastrophes are already approaching $ 50 billion this year, thanks to 10 major disasters that each caused $ 1 billion or more in losses. They include:

* Tropical Storm Irene, which swept along the East Coast from Aug. 20 to 29, inflicting more than $ 7.3 billion in economic costs in states from North Carolina to Vermont.

* Flooding in the upper Midwest in summer that breached Missouri River levees, inundated thousands of homes and caused an estimated $ 2 billion in losses.

* Drought, heat wave and wildfires in Texas and other states that caused an estimated $ 10 billion in damages, with losses expected to continue to grow.

Industry experts say insurers can expect to foot the bill for more damages before the year is out, as colder weather brings the threat of winter storms that cause cars to crash, roofs to collapse and other damages.

III predicts that an unexpected snow storm that struck the East Coast on the final weekend of October – the third catastrophe to hit that region in as many months – will lead to thousands more claims from auto and homeowner policyholders.

Insured losses from winter storms last year totaled $ 2.6 billion, according to a report issued in January by Munich Re, and III says winter storms caused $ 25 billion in private-sector insurer payouts from 1990 to 2009.

“Snow and ice storms are the third-largest cause of U.S. catastrophe losses, behind only hurricanes and tornadoes,” says Worters, who points out that winter doesn’t even officially begin this year until Dec. 21.

While auto insurers may be looking to hike premiums in order to counteract record-setting catastrophe losses, Worters points out that they must get the approval of regulators before they can legally implement rate increases in any state.

“Insurers for some time have recognized that rates in many … states do not match the risk,” Worters says, “and frequency and severity trends have to be included in the rate-making process.”

A lot on your plate? These quick chores won’t make you late

How classroom technology can benefit your child’s education

5 essentials to get your backyard party-ready