Maybe everyone, including Jimmy Irsay, will live happily ever after. But probably not. 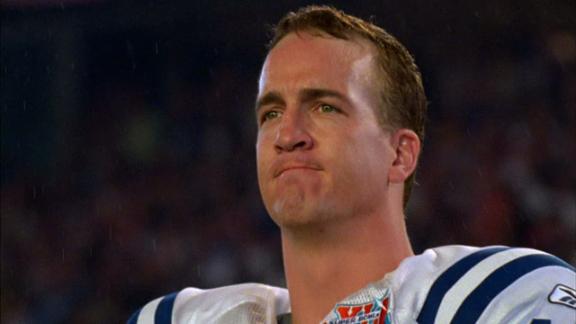 What if the Indianapolis Colts didn’t have the first pick of the 2012 NFL draft, but the third?

What if Peyton Manning was recovering from knee surgery, not multiple neck procedures?

What if Colts owner Jim Irsay didn’t talk out of both sides of his horseshoe?

None of it matters now because Irsay thinks his franchise is better off without Manning than with him. On Wednesday, the owner evicted Manning from the only NFL home the 14-year veteran has ever known. Manning is — and this will take some getting used to — a free agent. 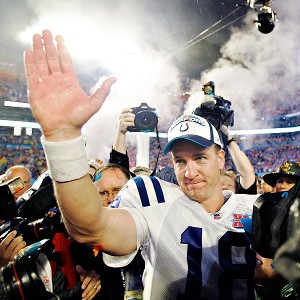 AP Photo/David DupreyPeyton Manning has waved to fans in Indianapolis for the last time.

Think about it: Irsay would rather roll the bones on Andrew Luck or Robert Griffin III than on Manning. Luck and RG3 have a combined zero NFL snaps. Manning has a Super Bowl ring and four league MVP awards and has thrown for more yards in NFL history than everyone except Brett Favre and Dan Marino.

And never mind what caused this divorce or where he’ll end up next. How about we take a few moments and remember exactly what a legend looks like?

Manning made Indianapolis forget that it was a football stepmother.

Manning transformed a horrible franchise into a perennial contender.

Manning killed it on “Saturday Night Live” (“I just thought about going out there for the second half, and a little bit of pee came out.”)

Manning reported to the Giants Stadium interview room wearing a suit and tie — and no shoes or socks — after a night-game win against his brother Eli. He did it (and I was there) because he knew the East Coast sports writers were on a crushing deadline.

Manning led the Colts to a pair of Super Bowls and won one.

Manning engineered a comeback for the ages: down 21 points at Tampa Bay with four minutes left, and won the game in OT! 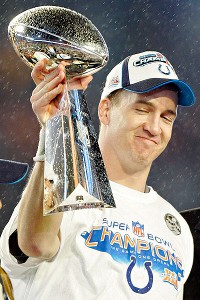 AP Photo/Amy SancettaWhoever the next Indianapolis quarterback is will be talented, for sure. But he won’t have done what Manning did for the Colts: hoist the Vince Lombardi Trophy.

Manning prepared so thoroughly that he could have double-dipped as a coach.

Manning had 63 games with at least 300 passing yards.

Manning was proud of playing in Indianapolis.

But this is about the business and commerce of the NFL, not loyalty. Plus, the necks of Luck and Griffin haven’t felt a surgeon’s scalpel. And the price tag for a rookie quarterback, even the No. 1 overall pick, is Happy Meal-cheap compared to what it would have cost Irsay to sign Manning. In 2012 alone, we’re talking a $ 28 million bonus and $ 7.4 million in salary.

I know Irsay’s decision makes financial sense, but that doesn’t mean it makes football sense. If Manning is healthy — and his arm strength certainly seems to be trending that way — then Irsay just deprived the Colts of their best chance to win games.

Luck, the presumptive No. 1 choice, was a remarkable college quarterback. But show me the documentation that guarantees he’ll be a remarkable NFL quarterback. I’ll go read — and finish — James Joyce’s “Ulysses” as you try to find that paperwork.

Manning was remarkable before neck surgeries forced him to miss the entire 2011 season. And by all accounts of his rehab, he could return close to that same form for the 2012 season and beyond.

And had he stayed in Indianapolis, there’s no way the Colts would go 2-14 again. Irsay could have kept Manning, then traded the overall No. 1 pick for at least two first-round picks as well as a third-rounder and a fifth-rounder. Think that would’ve helped the short- and long-term rebuilding process? 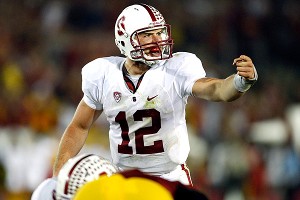 AP Photo/Cal Sport MediaAndrew Luck appears, at least, to have the poise behind center that Manning exhibited on a weekly basis.

Teams are already lining up as though Manning is an iPad 3. The Miami Dolphins, Redskins, Arizona Cardinals and Kansas City Chiefs could desperately use him. The New York Jets, Seattle Seahawks and, if you listen to Rice, the San Francisco 49ers ought to kick the tires on signing the soon-to-be 36-year-old quarterback.

Irsay (and others) will insist that you get only so many opportunities to draft a quarterback the caliber of Luck. But you also get only so many opportunities to draft and keep a quarterback with Manning’s first-ballot Hall of Fame credentials. Ask yourself this question: Would the Colts win more games during the next one to three years with a healthy Luck or a healthy Manning?

I’ll give Irsay credit for making a difficult decision. But for all his talk during the past four months, when he sliced apart the Peyton-returns scenarios as though they were garlic cloves, it is obvious he didn’t want to keep No. 18. If he did, Manning would still be a Colt.

But I doubt it. 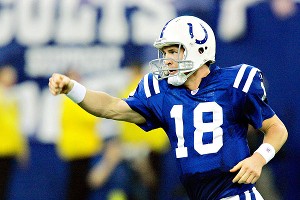 AP Photo/Michael ConroyHe isn’t finished, something the Colts are likely to find out the hard way.

Experience counts. Manning — even a 90-percent-healthy version of him — counts.

Irsay forgot this. Or chose to ignore it. Now Manning has a chance to remind him.

Remember the story Manning told Sports Illustrated’s Peter King years ago about the 1998 draft? Colts management was split over which quarterback to take with the No. 1 overall pick: Manning or Washington State’s Ryan Leaf.

Manning requested a meeting with then-general manager Bill Polian and then-coach Jim Mora. He told them, “I’d really like to come here if you want me. But if you don’t, I promise you I’ll come back and kick your ass for the next 15 years.”

Now Irsay and the Colts don’t want him anymore. So Manning will adapt. He always does.

He’ll kick their butt for the next three years.

Gene Wojciechowski is the senior national columnist for ESPN.com. You can contact him at gene.wojciechowski@espn.com. Hear Gene’s podcasts and ESPN Radio appearances by clicking here. And don’t forget to follow him on Twitter @GenoEspn.

So, what’s the deal with beef and heart health?